All flagships of Huawei 2019

For the first 4 months of 2019 Huawei has released a lot of gadgets, including low-end, mid-priced and flagship solutions. In today's article we would like to list all the top devices of the Huawei brand, as well as its subsidiary Honor. Particular attention will be paid to the best 2019 camera phone Huawei P30 Pro with a 10x hybrid zoom without loss of quality, rumors about the Mate 30/30 Pro, as well as the bendable smartphone Huawei Mate X, competitor to Samsung Galaxy Fold. 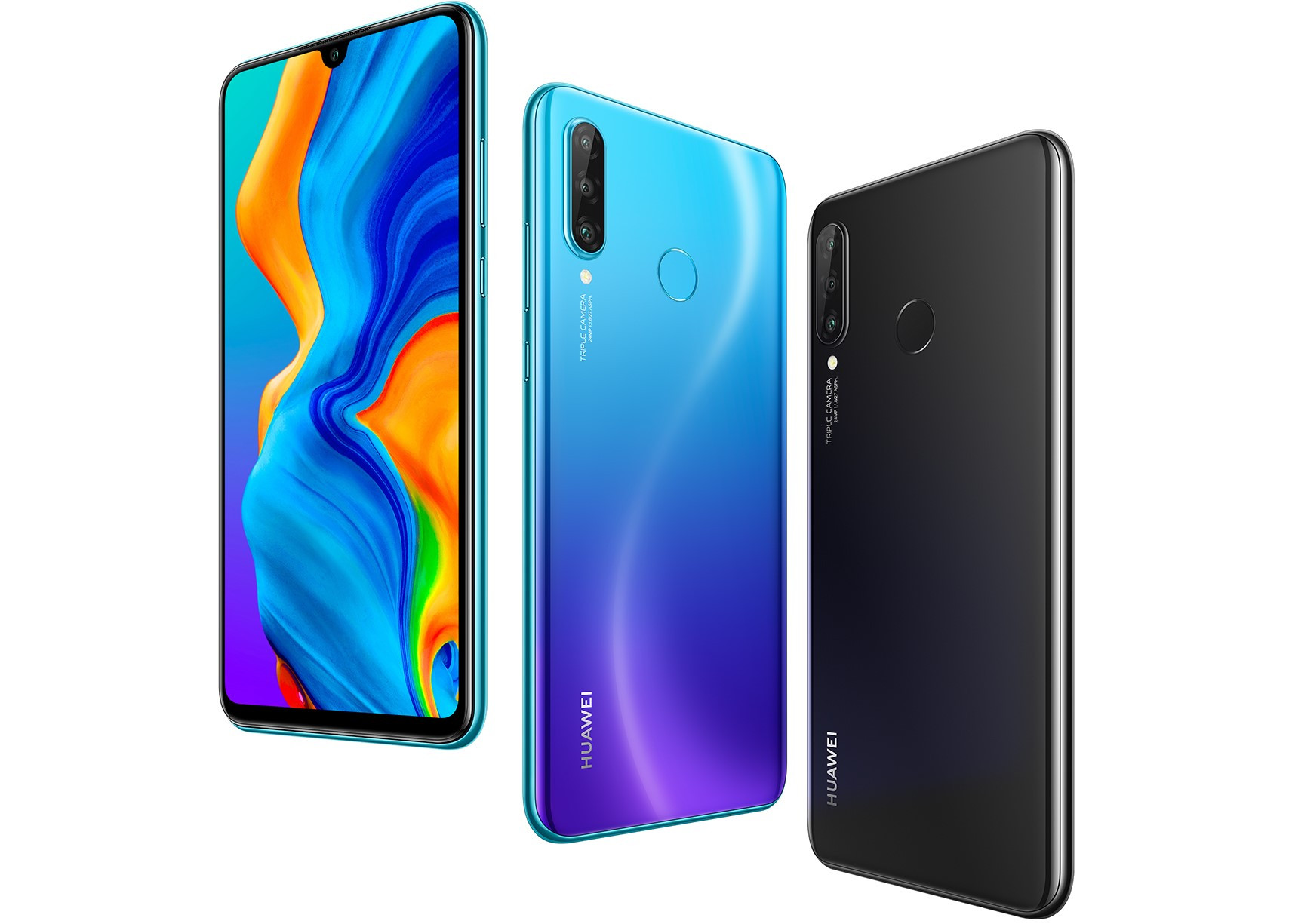 True to good old tradition, in 2019 Huawei has introduced three flagships, or rather one sub-flagship and two top solutions. Huawei P30 Lite is very different from its two older brothers, so it also has the Lite prefix. Having more modest characteristics, the device is not just some cheap device, having attracted a lot of attention. Outwardly it does look lot like Huawei P30 and this is its undoubted advantage as visual component determines almost 50% of the success of the device. Hardware in the device is productive, the Kirin 710 is placed somewhere between Snapdragon 660 and 710, and the device also offers at least 4/128 GB of memory. For gamers, GPU Turbo 2.0 technology is provided, which accelerates the video core and makes the gaming process more comfortable.

The device is equipped with a convenient 6.15-inch IPS-screen, matrix of which has NTSC color space coverage up to 96%, high brightness and contrast. The display occupies about 85% of the usable area, has 2.5D roundings at the protective glass and a high quality oleophobic coating. Huawei didn’t cut down on P30 Lite’s on photo capabilities, equipping it with a triple main camera. The main Sony IMX576 sensor has a resolution of 24 MP, high-aperture optics f / 1.8, and in addition to it, there is an 8 MP ultra-wide camera and a 2 MP depth sensor. The front of the smartphone is equipped with a 32 megapixel front camera with support for face recognition technology. Battery of the device is at 3340 mAh, with support for fast charging, 3.5 mm headphone jack, Type-C port and a fingerprint scanner, located on the rear panel.

Given the cost of the Huawei P30 Lite, which is in range of $ 300, it is really affordable smartphone with excellent features. He has a wide range of photo opportunities, there is a game potential, etc. Conclusion: we have a device with an optimal price / quality ratio. 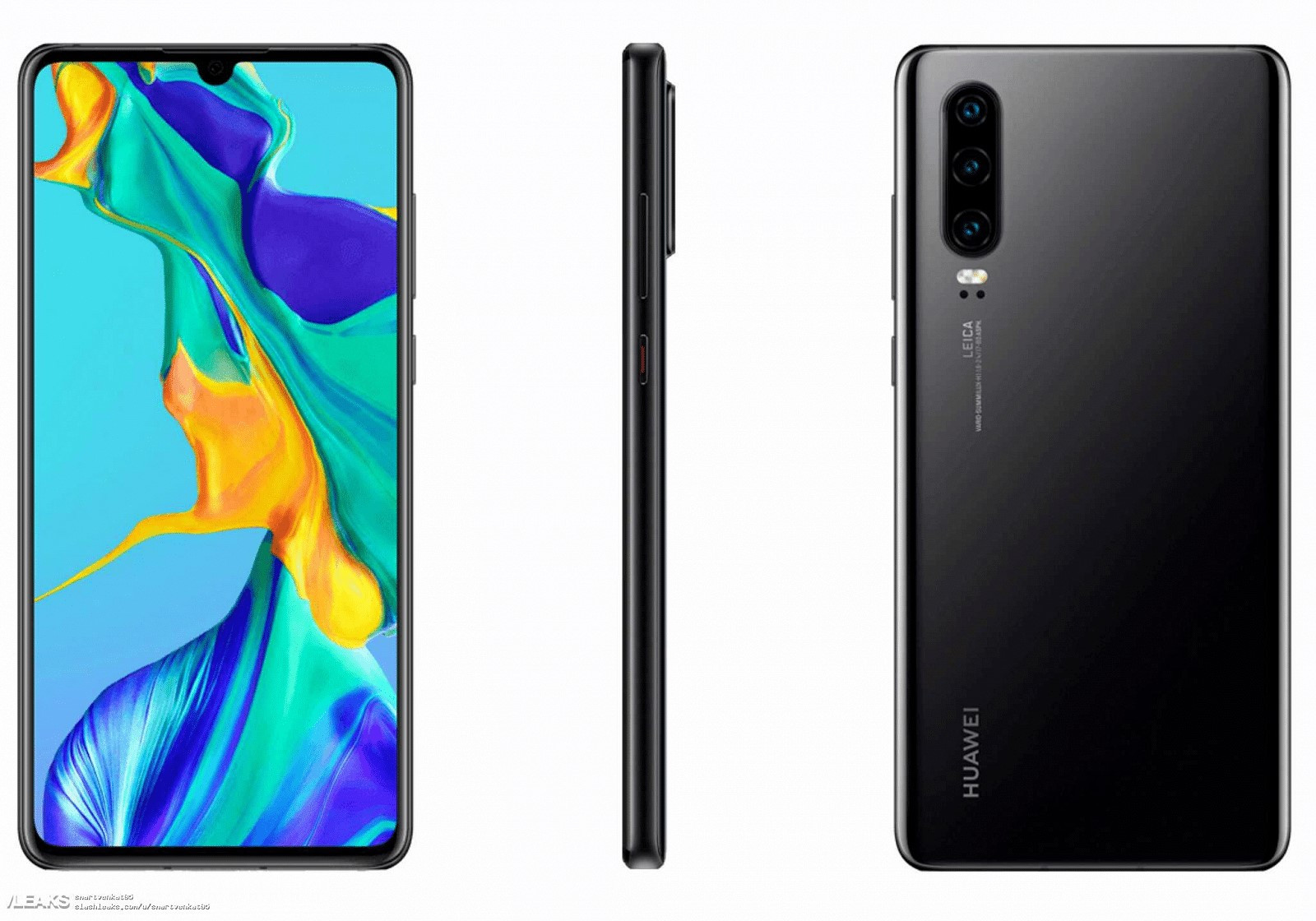 Although the P30 is a flagship model, it’s still a simplified version of the P30 Pro. However, the difference will not be noticeable if you are not an ardent fan of mobile photography and you do not need a crazy zoom or a huge number of camera sensors. The smartphone looks expensive and prestigious, and it has a lot of various interesting colors. The device is powered by top end processor Kirin 980 with 6/8 GB of RAM and 64/128/256 GB of built in memory. Although the device supports GPU Turbo 2.0 technology, at this stage it may not be needed for gaming – since all hardware is already at the maximum graphics settings.

The company decided not to equip the smartphone with an inconvenient overall display and relied on a 6.1-inch high-quality OLED. HDR, DCI-P3 modes, as well as brightness up to 650 nits are all available in the smartphone. Also, due to the use of the OLED, it was possible to place the fingerprint scanner directly under the display. The photo capabilities of the device are more striking, since the main camera of Huawei P30 consists of three photo modules. The combination of the SOny IMX600 40 MP + 16 MP ultra-wide module + 8 MP telephoto module gives unlimited field for creativity. The main 40 MP sensor is unique in that it has not a standard RGGB matrix, but a new RYYB, which allows you to capture even more light. The 16 megapixel module allows you to shoot with a viewing angle of 120 degrees, and the 8 megapixel module provides a 3xd optical zoom. Super slow motion video can be shot with the main camera a frame rate of up to 960 fps in 720p resolution. The front camera has a resolution of 32 MP and it is great for creating high-quality selfies. Stereo sound with support for Dolby Atmos technology, dual GPS, NFC module, Type-C version 3.1, as well as a 3650 mAh battery that supports fast charging up to 22.5 watts. Considering that Huawei is far from a cheap brand, the P30 sells from $ 700 on average, which is very reasonable for its specs and appearance. 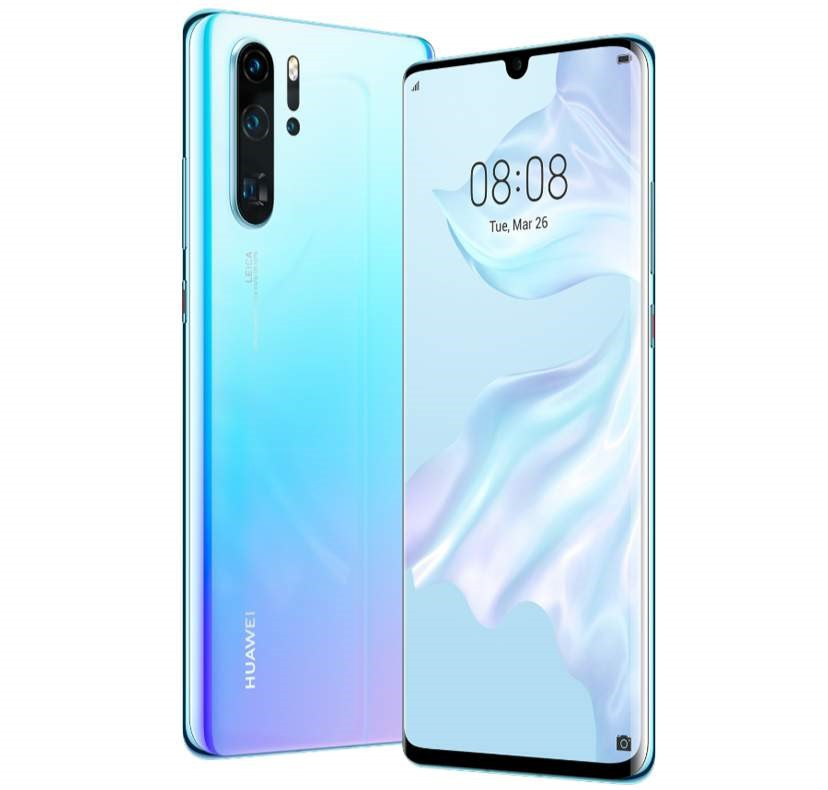 And this is a real monster both in cameras, and in performance, and in autonomy. Cardinally, the version with the Pro prefix does not differ in appearance from the P30, but it is delivered by a powerful camera unit and almost no frames around the display. Above and below they are so minimal that the smartphone had to be equipped with a display that also served as a conversational speaker. The processor in the smartphone is the same Kirin 980 with 8 GB of RAM, but the constant memory can be 128/256 or as much as 512 GB. OLED screen with a diagonal of 6.47-inch, its useful area is almost 90%, there is support for HDR and DCI-P3. A fingerprint scanner is also located under the display.

The camera is what sold the device, as no one has yet had such a combination of software and hardware. The main Sony IMX650 RYYB-sensor at 40 MP is supplemented with a 20 MP ultra-wide camera, 8 MP telephoto camera and ToF depth sensors. The smartphone is unique in that it offers 5x optical, 10x hybrid zoom without loss of quality, as well as 50x digital zoom. The qualitative approximation is due to the optical stabilization of the sensor. The Huawei P30 Pro photo is doing great, because the Time of Flight module is responsible for determining the depth of field. Slow-mo recording and front camera resolution are similar to those of the Huawei P30.

Huawei P30 Pro has a two-position high-speed GPS-module, Type-C 3.1, NFC. The smartphone offers a huge 4200 mAh battery with support for fast charging at 40 W, as well as the presence of wireless charging at 15 W with a reverse charging function. Incredible camera, top-end hardware, gorgeous screen and appearance - they ask for all this stuff from $ 1,000. The only “imperfection” you can find is that it has no stereo and no 3.5 mm headphone jack 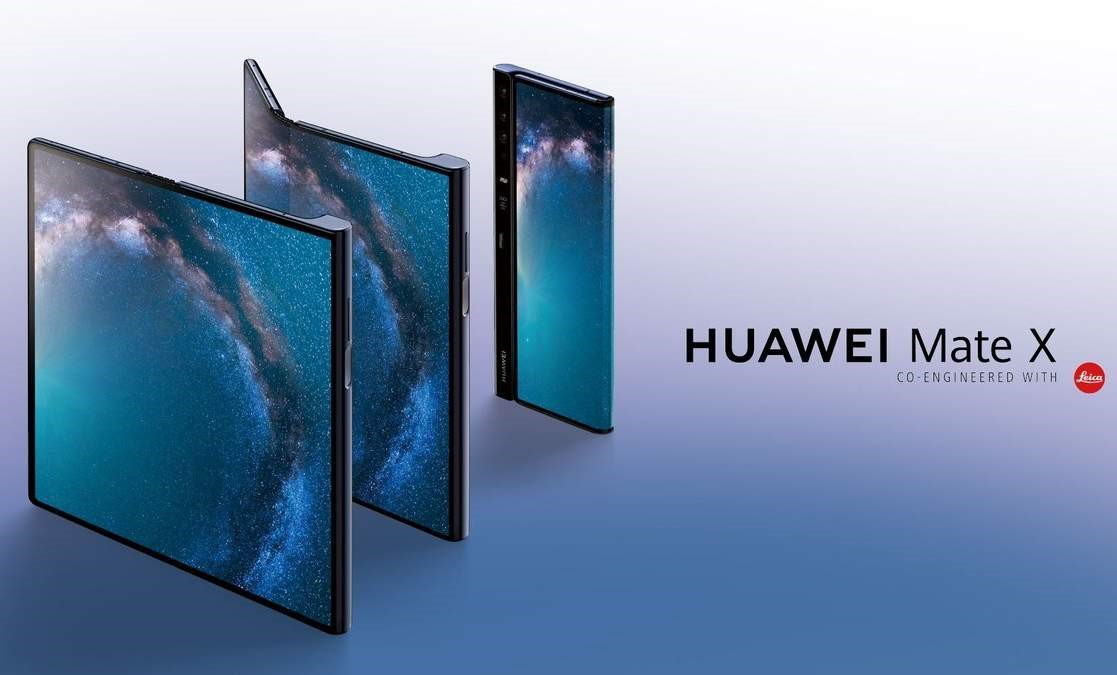 You have probably noticed that lately, manufacturers have firmly taken up the idea of ​​bending devices, which in one movement, turns a smartphone into a tablet and vice versa. But the idea is far from new, but only in 2019 technology allowed to implement something this interesting. Folding device Huawei Mate X is a combination of all the most advanced developments of the brand in one place. Its uniqueness is that in a fully unfolded form, its display has a diagonal of 8 inches with an aspect ratio of 8: 7.1 (almost square). Folding the device in half, the tablet turns into a smartphone with two screens: the first has a diagonal of 6.6 inches with an aspect ratio of 19.5: 9, and the second is 6.38 inches with a ratio of 25: 9. Considering the fact that Huawei Mate X offers the flagship a solid Kirin 980 with 8/512 GB of memory, a triple camera 40 MP + 8 MP + 16 MP, a 4500 mAh battery, it becomes clear that there is nothing better in the market. Of course, there is a certain similarity of the Galaxy Fold, but there is a different concept, due to which Huawei Mate X looks more impressive. The only drawback of the device is its price of 2600 dollars.

Honor 10i and Honor 20i - flagship of Huawei sub-brand. 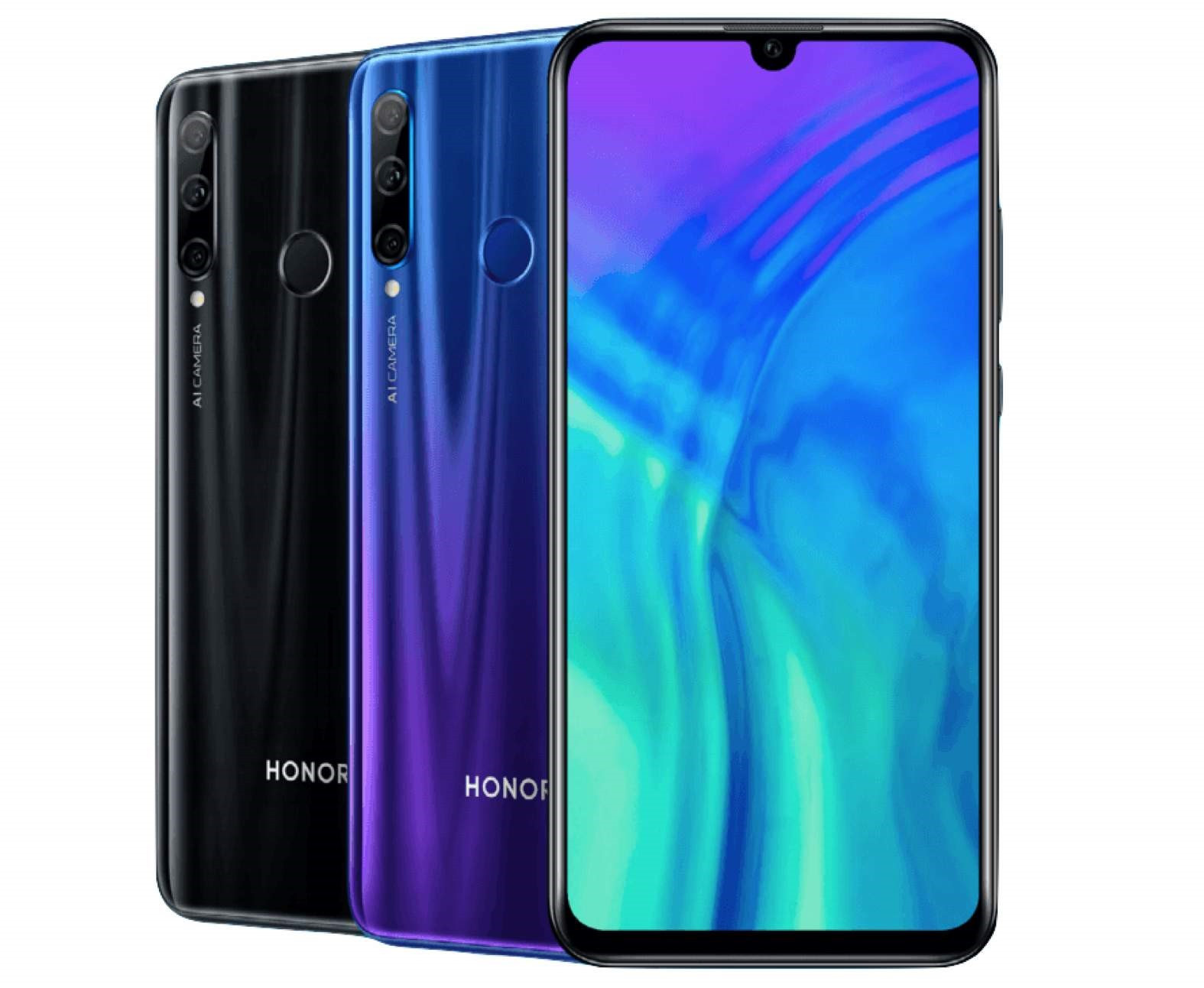 You probably have a question, how much, Honor has released two identical devices under different names? The answer is simple: Honor 10i is designed for the Russian market, and Honor 20i is more focused on Chinese consumers. At the same time at the price of gadgets do not differ, costing about $ 300, which equates to the cost and the original Huawei P30 Lite. 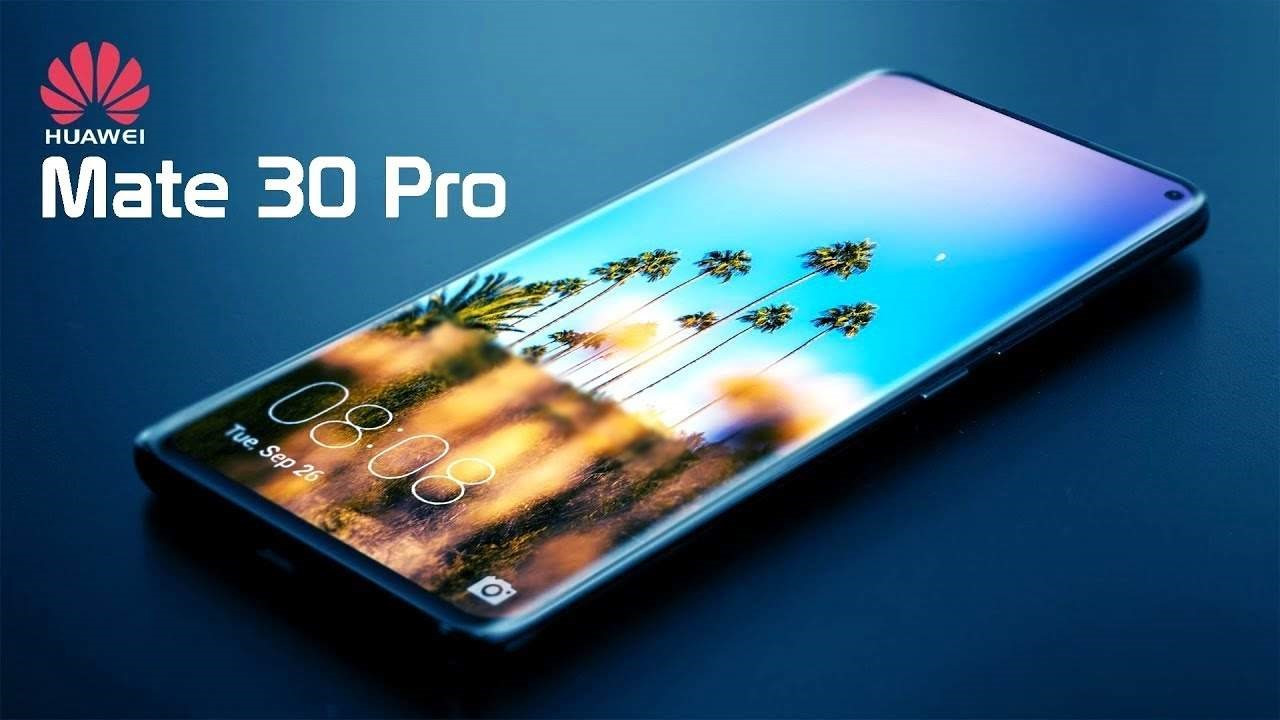 By the end, we will tell you about what is known today about the future flagships of Huawei, which it will present in the autumn of 2019. Smartphones will differ from each other, but what exactly, we cannot yet say. Therefore, talking about rumors with regards to the Huawei Mate 30 and Mate 30 Pro, we will not divide them into two different gadgets but will highlight the situation as a whole.

Two main leaks with regards to gadgets reveal some details about the batteries and the new system of optical image stabilization in cameras. So, it is reported that the line of Huawei Mate 30 will receive a new layout of internal elements called Subtract Like PCB. In practice, this will allow devices to have more capacious batteries and it is possible that with the same dimensions (as in the Mate 20), the capacity of the battery will increase up to 5000 mAh. The technology of placing the SLP components is already being put into practice by such mega-corporations as Samsung and Apple in their latest devices. Huawei has long been at the same level with these leading players in the mobile market, so it is not surprising that status obliges the Chinese brand to follow the latest achievements of progress.

The second leak concerns the new fluid optics for the flagship Mate 30 Mate 30 Pro. The technology itself is not new, and the combination of two types of liquids in the lens cavities was already demonstrated by Philips in 2004. The technology is very specific because only 14 years later, manufacturers decided to resume work in this direction. Huawei is an innovator in the smartphone market and not only, so the appearance of the new liquid stabilization system in the Mate 30 and 30 Pro is guaranteed.

The essence of the technology lies in the fact that the design of a liquid lens includes the lens itself, inside of which there are two liquids with different densities, because of which they are immiscible (most often it is water and oil). By changing the electrical potential, the camera device can focus and stabilize the picture. The advantage of the new optics over the classical one is that it changes the focal length over a wider range, focuses faster on the object and does not have any mechanical elements. That is, the new optics is more versatile (only one camera can replace the wide-angle, the usual module and the camera), a rapid and reliable. Perhaps the success of Huawei in this field will lead to the fact that the multicam in smartphones will disappear and we will again be able to admire devices with one, maximum of two camera eyes.

You can also place pre-order at your website and become the first owner of this novelty!