Huawei P40 Pro - disclosed all the technical characteristics of the flagship, as well as its appearance

At the end of March 2020, Huawei will introduce two flagships - the P40 and P40 Pro. As usual, the entire stock of advanced technologies and developments will be received by the Huawei P40 Pro model, which means we'll talk about this smartphone today. As of today there are already enough leaks and information regarding the gadget, in fact, the design of the device is almost 100% disclosed. If you believe the leaks, the device will receive an ultra-powerful main camera with the ability to 10x optical zoom, a huge battery of 5500 mAh, fast charge of 50 watts, and at the same time a lower price tag compared to the previous model Huawei P30 Pro (due to the lack of Google- services). In general, some monster of the smartphone industry is waiting for us, and it really pleases that Huawei does not give up and continues to bend its line no matter what! 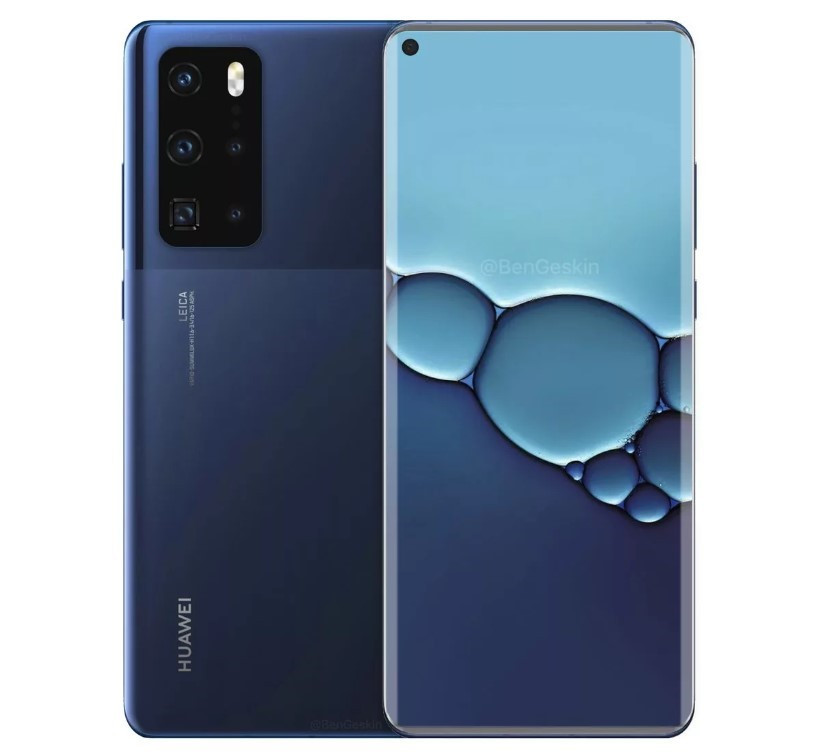 Although Huawei is trying to create a more or less unique smartphone design, this time we can observe some symbiosis: the company borrowed some elements from Apple and some from Samsung. So, on the front panel, you can see an almost completely frameless display with a hole for a dual front camera in the upper left corner. On the back panel, there is a fairly massive platform with cameras, of which there are five pieces. As usual, the case will be made of glass and metal, and in the end, we will get a pretty beautiful and interesting device.

It is necessary to surprise users, therefore, the device is equipped with a 6.5-inch QuadHD-screen (for the first time at Huawei) with an AMOLED matrix, which has a refresh rate of up to 120 Hz. In this case, the fingerprint scanner will be located under the display. For the work of the gadget, its own Kirin 990 chip will answer, which fights on equal terms with the Snapdragon 865. The solution is very powerful, especially in terms of artificial intelligence, and it will also give confidence 8/12 GB of RAM paired with 128/256 GB of ROM.

What are smartphones showing off in the first place? Of course the cameras! Huawei P40 Pro will generally receive the most top-end kit among the entire line of Huawei P, offering five sensors at once, which is not surprising. The most important photosensor will be a 52 MP sensor with a lens from Leica. Like other matrices with a large number of megapixels, this solution can combine 4 pixels into one for better shooting at night, and also gives optical zoom without loss of quality by crop of the picture. So, when shooting at a resolution of 52 MP, the pixel size is 0.96 μm, and when combining the pixels in a pool, the output is 13 MP with a total pixel size of 1.92 μm. Also in the device, there will be a telephoto camera with tenfold optical zoom at 16 MP, a wide-angle camera, a macro camera and a ToF depth sensor.

Huawei P40 Pro will be released on the Android operating system - while the development of its own OS has either hung or is slowly moving, but it is not ready! There will be no Google services in the device, but Huawei will replace the partially missing programs with utilities from its own AppGallery store - at least the most popular programs can be downloaded there. Due to missing services from Google, the Huawei P40 Pro will cost about $ 200 less than the P30 Pro at the start of sales.

Finally, the company also intends to greatly increase its battery capacity, instead of the 4200 mAh battery (this is the case in the Huawei P30 Pro), the new product will have a 5500 mAh battery with support for fast charging at 50 watts. It follows from this that the company is doing everything to get around its competitors and not face the dirt, even in such a difficult situation.